KELOWNA, BC / ACCESSWIRE / July 29, 2021 / Lexaria Bioscience Corp. (NASDAQ:LEXX)(NASDAQ:LEXXW) (the "Company" or "Lexaria"), a global innovator in drug delivery platforms is extremely pleased to issue partial results from human clinical study HYPER-H21-1 evaluating DehydraTECHTM-processed cannabidiol ("CBD") for potential application against hypertension. Partial results related to blood pressure ("BP") are being released today, while additional BP subset analyses and all other data analyses including pharmacokinetic ("PK") evaluations and detailed blood chemistry work is in progress and will be released when complete.

"We are very encouraged by these early results in our 2021 hypertension program," said Chris Bunka, CEO of Lexaria. "Lexaria's technology enabled a rapid and sustained drop in blood pressure, especially systolic pressure and particularly in Stage 2 hypertensive volunteers."

BP was reduced across both male and female volunteers and was most pronounced with DehydraTECH-CBD in the first 10-50 minutes of the study, reinforcing our pre-existing findings demonstrating that DehydraTECH delivers superior performance over generic CBD controls.

Blood pressure reduction from baseline was greatest when measured via systolic pressure. In the subset of volunteers who were Stage 2 hypertensive, peak systolic BP reductions from baseline were observed of as much as approximately 13 mmHg by the 50-minute time point with DehydraTECH-CBD, and systolic BP remained depressed throughout almost the entire 3-hour duration of the study. For reference, other studies of coronary heart disease ("CHD") have concluded that "lowering systolic pressure by 10 mm Hg or diastolic pressure by 5 mm Hg using any of the main classes of drugs reduced CHD events (fatal and nonfatal) by about a quarter and stroke by about a third, regardless of the presence or absence of vascular disease and of pretreatment BP. Heart failure is also reduced by about 25%."

There was also a tendency for a greater reduction in relative diastolic pressure from baseline with DehydraTECH-CBD than the concentration matched, generic CBD control (Fig 1). This was most notable in the initial 10-20 minute period post-dosing evidencing statistical significance at the 20-minute timepoint (p=0.025).

As well, there was a tendency for relative Mean Arterial Pressure ("MAP") to be reduced greater from baseline with the DehydraTECH-CBD than the concentration matched, generic CBD control; again, most notably in the initial 20 minutes post-dosing (Fig 2.). By comparison, in Lexaria's 2018 human clinical study, 120 minutes were required to achieve the same level of MAP reduction, demonstrating superior rapidity of onset of the "DehydraTECH 2.0" CBD formulation used in the present study relatively speaking. 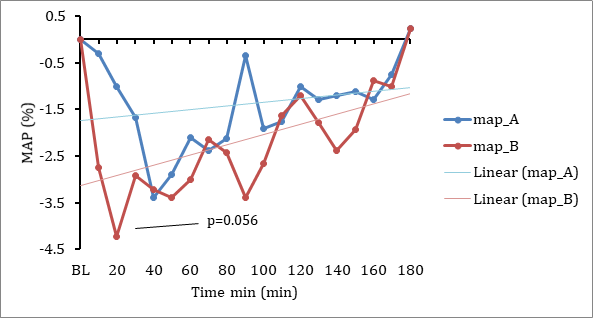 Lexaria was also pleased that its DehydraTECH-CBD was well tolerated by all subjects, with no serious adverse events or side effects observed or reported. Ingestion of the concentration-matched, generic CBD control, on the other hand, resulted in unwanted side effects in some of the volunteers, namely gastrointestinal distress including diarrhea. These findings corroborate what Lexaria has previously evidenced in other unrelated studies whereby human volunteers have also experienced reduced side effects with DehydraTECH-processed test articles compared to concentration-matched, generic controls.

Lexaria looks forward to completing its ongoing additional sample and data analyses work for this study and reporting upon those outcomes when complete. Lexaria's second human clinical hypertension study of 2021, study HYPER-H21-2, has completed dosing as previously reported and, in that study, three separate doses of DehydraTECH-CBD (150mg per dose) were used, administered evenly over the course of a 24-hour monitoring period. Based on the BP reducing trends witnessed in the present study, Lexaria is optimistic that repeat dosing such as this over a sustained period may further enhance efficacy. The results of these two studies will be carefully evaluated and considered before Lexaria's third planned human clinical hypertension study of 2021 begins, expected this Fall. Lexaria is evaluating study considerations for a fourth, expanded, randomized, controlled human clinical hypertension trial, with a view to building upon the results of current investigations in a larger population for enhanced statistical and clinical significance.

About Human Study HYPER-H21-1
Human Study HYPER-H21-1 was conducted at a European medical research hospital. Twenty-four human volunteers aged 45-65 with otherwise untreated pre- or mild-hypertension were given either a single 300mg dose of generic CBD, or a single 300mg dose of DehydraTECH-CBD and studied over a 3-hour duration. The weight of the average woman in the study was 178 lbs, and the weight of the average man in the study was 223 pounds. Blood pressure and heart rate analyses were taken every 10 minutes and speed and rate of absorption of the CBD and its main metabolites (PK assessments) were also assessed during the study. Secondary analyses that will be reported when complete include evaluation of inflammatory and oxidative markers associated with cardiovascular disease and gold-standard biomarkers of nitric oxide. This latter measure provides mechanistic insight into the reduction in blood pressure via vasodilation.

Inflammatory marker assessments may also be applicable to Lexaria's research initiatives in the antiviral therapeutics space whereby effective anti-inflammatory therapies are also useful in treating diseases like COVID-19 or other common pro-inflammatory conditions, where Lexaria has already successfully demonstrated DehydraTECH utility with one such anti-inflammatory drug, colchicine, used for COVID-19 treatment today as previously reported.

Hypertension Markets
The Hypertension market is valued at $28 billion per year and is expected to continue growing as one of the world's top health problems. Geographically, some of the highest rates of growth are expected in more recently industrialized nations such as China and India. Over 1.1 billion people worldwide suffer from hypertension - elevated blood pressure.

Drugs focused on blood pressure and related conditions are some of the highest selling drugs in the world. Lipitor, used to treat high cholesterol and reduce the risk of heart disease, has generated $94.7 billion in revenue from 1992 until 2017. Plavix is used to prevent heart attack and stroke, has sold $46.5 billion from 1992 until 2017. There are several hypertension drugs that each generate $1 billion per year or more in revenue.

About Lexaria Bioscience Corp.
Lexaria Bioscience Corp.'s proprietary drug delivery technology, DehydraTECH™, improves the way active pharmaceutical ingredients (APIs) enter the bloodstream by promoting healthier oral ingestion methods and increasing the effectiveness of fat-soluble active molecules, thereby lowering overall dosing. The Company's technology can be applied to many different ingestible product formats, including foods, beverages, oral suspensions, tablets, and capsules. Since 2016, DehydraTECH has repeatedly demonstrated the ability to increase bio-absorption with cannabinoids and nicotine by up to 5-10x, reduce time of onset from 1 - 2 hours to minutes, and mask unwanted tastes; and is planned to be further evaluated for orally administered bioactive molecules, including anti-viral drugs, vitamins, non-steroidal anti-inflammatory drugs (NSAIDs) and more. Lexaria has licensed DehydraTECH to multiple companies including a world-leading tobacco producer for the development of smokeless, oral-based nicotine products and for use in industries that produce cannabinoid beverages, edibles, and oral products. Lexaria operates a licensed in-house research laboratory and holds a robust intellectual property portfolio with 21 patents granted and over 50 patents pending worldwide. For more information, please visit www.lexariabioscience.com.

CAUTION REGARDING FORWARD-LOOKING STATEMENTS
This press release includes forward-looking statements. Statements as such term is defined under applicable securities laws. These statements may be identified by words such as 'anticipate,' 'if,' 'believe,' 'plan,' 'estimate,' 'expect,' 'intend,' 'may,' 'could,' 'should,' 'will,' and other similar expressions. Such forward-looking statements in this press release include, but are not limited to, statements by the company relating the Company's ability to carry out research initiatives, receive regulatory approvals or grants or experience positive effects or results from any research or study. Such forward-looking statements are estimates reflecting the Company's best judgment based upon current information and involve a number of risks and uncertainties, and there can be no assurance that the Company will actually achieve the plans, intentions, or expectations disclosed in these forward-looking statements. As such, you should not place undue reliance on these forward-looking statements. Factors which could cause actual results to differ materially from those estimated by the Company include, but are not limited to, government regulation and regulatory approvals, managing and maintaining growth, the effect of adverse publicity, litigation, competition, scientific discovery, the patent application and approval process, potential adverse effects arising from the testing or use of products utilizing the DehydraTECH technology, the Company's ability to maintain existing collaborations and realize the benefits thereof, delays or cancellations of planned R&D that could occur related to pandemics or for other reasons, and other factors which may be identified from time to time in the Company's public announcements and periodic filings with the US Securities and Exchange Commission on EDGAR. There is no assurance that any of Lexaria's postulated uses, benefits, or advantages for the patented and patent-pending technology will in fact be realized in any manner or in any part. No statement herein has been evaluated by the Food and Drug Administration (FDA). Lexaria-associated products are not intended to diagnose, treat, cure or prevent any disease. Any forward-looking statements contained in this release speak only as of the date hereof, and the Company expressly disclaims any obligation to update any forward-looking statements contained herein, whether as a result of any new information, future events, changed circumstances or otherwise, except as otherwise required by law.

Back to the top